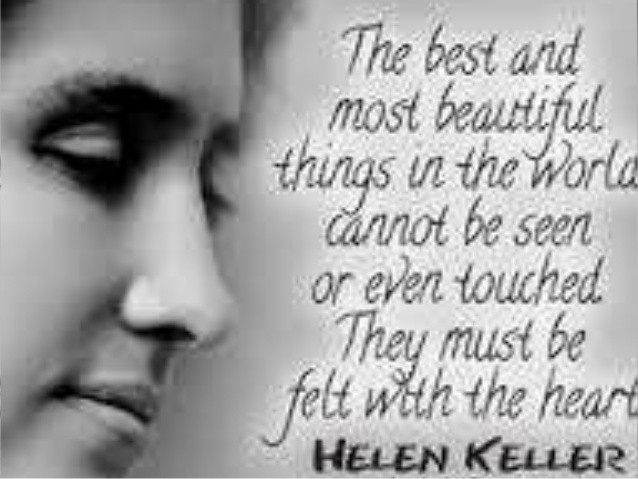 I came across this story written by Helen Keller and was so inspired that I wanted to share it with you. Her true attitude of gratitude despite very challenging circumstances, humbles and inspires me.

As many of you know, Helen was both totally blind and totally deaf. At a time before modern technological advances and with the help of a wonderful teacher, she learned to read, write, and to speak. It’s a  little long but worth the read. Enjoy it, and take this remarkable woman’s spirit of gratitude with you into 2017, because the best is yet to come!

Christmas in the Dark, by Helen Keller

When I was a little girl I spent the Christmas holidays one
year at the Perkins Institution for the Blind. Some of the
children, whose homes were far away, or who had no homes, had
remained at the school. I have never known a merrier Christmas
than that.

I hear someone ask: “What pleasure can Christmas hold for
children who cannot see their gifts or the sparkling tree or the
ruddy smile of Santa Claus? “The question would be answered if
you had seen that Christmas of the blind children. The only real
blind person at Christmas-time is he who has not Christmas in his
heart. We sightless children had the best of eyes that day in
our hearts and in our finger-tips. We were glad from the child’s
necessity of being happy. The blind who have outgrown the
child’s perpetual joy can be children again on Christmas Day and
celebrate in the midst of them who pipe and dance and sing a new
song!

For ten days before the holiday I was never still a single
moment. I would be one of the party that went Christmasing. I
laid my hands on everything that offered itself in the shops, and
insisted on buying whatever I touched, until my teacher’s eyes
could not follow my fingers. How she ever kept me within the
bounds of the fitness of things, maintained the scale of values,
and overtook the caprices of my fancy, is matter of amazement.
To the prettiest doll I would adhere a moment, then discover a
still prettier one, and by decision the more perplex her and
myself. At last the presents were selected and brought home.
Next, a great Christmas tree, a cedar which towered above my
head, was brought to the house where the children lived and
planted in the middle of the parlour. Preparation kept us
busy for a week. I helped to hang wreaths of holly in the
windows and over pictures, and had my share in trimming the tree.
I ascended and descended continually on the ladder to tie on
little balls, apples, oranges, cornucopias, strings of popcorn
and festoons of tinsel. Then we attached the little tapers which
should set the tree aglow.

Last came the gifts. As we placed one and then the other, it became more and more difficult for my
fingers to thread their way in and out between the candles, the
dangling balls, and the swinging loops of corn and tinsel, to
find a secure position for the gifts. It seemed as if the green,
sweet-scented branches must break with the burden of
love-offerings heaped upon them, and soon the higher branches did
begin to bend alarmingly with each heavier bundle, “like the
cliff-swallow’s nest, most like to fall when fullest.”
One of the last gifts I hung in the midst of the thick branches
was a most unseasonable and incongruous exotic – a toy cocoanut
palm with a monkey, which had movable limbs, and which at the
pressure of a spring would run up and slide down with a tiny
cocoanut upon his head. Behold the miracle of toyland, a palm
grafted upon a cedar! What matters botany? When a little girl
wants anything to happen at Christmas, it happens and she is
content.

Finally the tree was trimmed. Stars and crescents sparkled
from branch to branch beneath my fingers, and farther up a large
silver moon jostled the sun and stars. At the very top an angel
with spread wings looked down on this wondrous, twinkling world –
the child’s Christmas world complete! But I think the stupendous
view must have made him a little dizzy, for he kept turning
slantwise and crosswise and anywise but the way a Christmas angel
should float over a Christmas tree.

My teacher and the motherly lady who was matron in that house
were children themselves; it really seemed as if there could not
be a grave, experienced grown-up in the world. We admonished
each other not to let fall a whisper of the mysteries that
awaited the blind children, and for once I kept the whole matter
at a higher value than a state secret.

On Christmas Eve I went to bed early, only to hop up many times
to rearrange some package, to which I remembered I had not given
the finishing touches, and to use all my powers of persuasion
with the unruly angel whom I invariably found in a reprehensible
position.

Long before anyone else was downstairs on Christmas morning, I
took my last touch-look at the tree, and lo! the angel was
correctly balanced, looking down in serene poise on the brilliant
world below him. I suspected that Santa Claus had passed that
way, and that under his discipline the angel, probably only a
demi-angel, had been released from his sublunary infirmities.
I turned to go, quite satisfied, when I discovered that Sadie’s
doll had shut her eyes on all the splendour that shone about her!
“This will never do,” I said – “sleeping at this time!” I poked
her vigorously, until she winked, and finally, to show she was
really awake, kicked Jupiter in the side, which disturbed the
starry universe. But I had the planets in their orbits again
before it was time for them to shine on the children.
After a hurried breakfast the blind children were permitted to
enter the parlour and pass their hands over the tree. They knew
instantly, without eyes, what a marvelous tree it was, filled
with the good smells of June, filled with the songs of birds that
had southward flown, filled with fruit that at the slightest
touch tumbled into their laps. I felt them shout, I felt them
dance up and down, and we all crowded about and hugged each other
in rapture.

I distributed all the gifts myself and felt the gestures of
delight as the children opened them. Very pretty gifts they
were, well suited to sightless children. No disappointing
picture-books, or paint-boxes, or kaleidoscopes, or games that
require the use of sight. But there were many toys wonderful to
handle, dolls, both boys and girls, including a real baby doll
with a bottle in its mouth; chairs, tables, sideboards, and china
sets, pincushions and work-baskets, little cases containing
self-threading needles that the blind can use, sweet-scented
handkerchiefs, pretty things to wear, and dainty ornaments that
render children fair to look upon. Blind children, who cannot
see, love to make themselves pretty for others to see.
There were animals, too, fierce lions and tigers, which proved
that appearances are most deceptive, for when one took their
heads off one found them full of sweet things. One girl had a
bear that danced and growled whenever she wound a key somewhere
in the region of its neck. Another had a cow that mooed when she
turned its head.

The older children received books in raised ‘print, not
mournful, religious books, such as some good people see fit to
choose for the sightless, but pleasant ones like “Undine,” or
Hawthorne’s “Twice-Told Tales,” or “The Story of Patsy,” or
“Alice in Wonderland.” Fairy tales, novels, essays, books of
travel and history, and magazines well filled with news of the
world and gossipy articles are thumbed by the blind until the
raised letters are worn down. Books of gloomy, depressing
character, and many that are full of dry wisdom and no doubt very
good for our morals, are likely to repose on the top shelf until
the dust takes possession of them. The blind are rendered by
their very affliction keenly alive to what is joyous and
diverting. Their books are necessarily few, and most of them
ought to be delightful and entertaining.

After we had touched our presents to our hearts’ content we
romped and frolicked as long as the little ones could go, and
longer. If you had looked in on our unlagging merriment and had
never seen blind children at play before, you might have been
surprised that in our wildest gyrations we did not run into the
tree, or knock over a chair, or fall into the fire that burned on
the hearth. I think, we must have looked like any other group of
merry children. You would have learned that the way to make the
blind happy at Christmas, and all the time, is to treat them as
far as possible like other persons. They do not like to be
continually reminded of their blindness, set aside and neglected,
or even waited on too much.

Had you been our guest you would have received a gift from the
sightless, for they have one precious gift for the world. In
their misfortune they are often happy, and in that they give an
inspiring challenge to those who see. Shall any seeing man dare
to be sad at Christmas or permit a little child to be other than
merry and light-hearted? What can excuse the seeing from the duty
and privilege of happiness while the blind child joins so merrily
in the jubilee?

“Tiny Tim” was glad to be at church on Christmas because he
thought the sight of him might remind folk who it was that gave
the lame power to walk. Even so the blind may remind their
seeing brethren who it was that opened the blinded eyes,
unstopped the deaf cars, gave health to the sick, and knowledge
to the ignorant, and declared that mightier things even than
these shall be fulfilled.

All the afflicted who keep the blessed
day compel the affectionate thought that He abides with us yet.
The legend tells that when Jesus was born the sun danced in the
sky, the aged trees straightened themselves and put on leaves and
sent forth the fragrance of blossoms once more. These are the
symbols of what takes place in our hearts when the Christ- Child
is born anew each year. Blessed by the Christmas sunshine, our
natures, perhaps long leafless, bring forth new love, new
kindness, new mercy, new compassion. As the birth of Jesus was
the beginning of the Christian life, so the unselfish joy at
Christmas shall start the spirit that is to rule the new year.